Address by the French Communist Party

Given the gravity of current events, and the responsibility of French governments over time, you will understand that I cannot address you today without speaking of the men and women who are suffering under the bombs and artillery shells that are falling not far from here;

women and men on the road, fleeing death, with nothing but the clothes on their backs;

women and men delivered into the hands of cold-blooded individuals and who die in terrible pain, insulted and humiliated, their bodies broken by the murderous blows of their persecutors.

I cannot stand here before you today, and I believe that you yourselves cannot listen to me without thinking of the women and men who ardently nurture their hope for better days while they languish behind prison walls;

those whose words of humanity soothe the pain inflicted by the injustice of the dominant powers upon the entire peoples, on women and men here and around the world.

I cannot, dear comrades, address you today without thinking of the women and men, especially in this country, who have found the courage to unite, to take to the streets, armed only with the immense dignity of their fervent desire for liberty, democracy and justice in the face of obscurantism, dictatorship and the power of money.

The French Communist Party (PCF) was forged in the fire of the workers’ movement in my country, tempered by the hopes of October 1917 and the refusal to accept the massive butchery of the First World War. The PCF will not abandon any of these essential battles to free humankind from capitalist exploitation and domination: we fight for peace, for social and human emancipation which necessarily includes, in our belief, environmental action, feminist action, and actions of international solidarity among workers and peoples.

In July 1922, Anatole France wrote these words in l'Humanité newspaper and they still ring true to us nearly one hundred years later:

“You think you are dying for your country; you die for the industrialists. These masters of men possessed the three things necessary for major modern undertakings: factories, banks, newspapers.”

“The World War was the work of financiers, (...) the industrial leaders of the different countries of Europe first desired it, then made it necessary, then incited it, and finally prolonged it. They made it their own sovereign domain, staked their fortunes on it and reaped immense profit from it, waging war so ardently that they ruined Europe, ruined themselves, and split the world apart.”

Today, people around the world remain

“… caught up in the web of the forces of capital whose only law is profit, domination and exploitation. The Middle East, with it vast reserves of oil, has been devastated since the end of the Ottoman Empire by endless wars, one following another to the point of conflation, feeding the furious imperialist ambitions of western powers and their regional allies [– and fuelling their rivals as well]. Colossal fortunes have been built on bottomless mass graves and the humiliation of entire peoples.

“We have not forgotten that Hitler, Franco and Mussolini rose to power in a landscape of ruin and poverty, hatred and xenophobia, with the active support of the barons of industry and arms manufacturers.

"Those who own the “factories, banks and newspapers” today have the same attitude; they prefer someone like Bolsonaro to the return of the left and social transformation in Brazil; they prefer Marshal Sisi in Egypt to a democratic regime; they would rather leave the Saudis to wage war against Yemen, creating a humanitarian crisis of historic proportions; they support Netanyahu in Israel rather than a free and independent Palestinian State; they prefer Trump in the White House rather than Bernie Sanders with his ideal of wealth distribution and health care; they stand by Mohammed VI and not the UN resolutions in favour of the Sahrawi and justice in the Rif; they prefer leaders like Salvini in Italy and Orban in Hungary1. »

In Syria, they prefer to sacrifice the democratic project built by the inhabitants [of Rojava] in the north-east; they prefer to watch women, men and children die, to banish them from their own country, battered by one of the worst wars of the past decade with its toll of atrocities, destruction and numberless deaths as well as millions of displaced persons.

The sharp rise of the forces of the far right and ultra-nationalism can drag humanity to the edge of a cliff where humanity has faltered before: manipulating people through hatred to turn them against one another.

In this world, none of us can yield an inch to warmongers or nationalists. This is what I am here to say, in the words of Jean Jaurès: “it is precisely because all countries are equal that no one country has the right to enslave another”.

“When hot-heads and charlatans cry “Country first!”, we can only agree if they mean country before personal convenience, before indolence, before egotism.

“But if they mean country before human rights, before human beings, we say: No. No country is above debate. Country is not above conscience.

“Country is not above the human. The day country turns against human rights, against the freedom and dignity of human beings, it looses its privileges.[...] A country is and remains legitimate only inasmuch as it guarantees individual rights.

“The day a single individual discovers, outside of the sphere of country, better guarantees for his rights, for his freedom, for his development, that is the day the country dies.” (Socialisme et liberté, 1898)

But we are not here only to listen to fine words.

We agree with our comrade, the late Samir Amin, who said that it is time for a new internationalism of workers, time to assemble our forces, leaving no room for compromise with the dominant ideology or ultra nationalism.

Consensus among ourselves is necessary because none of our forces alone can assume to judge the political choices and strategies that others employ to carry the class struggle forward. But although we may diverge with regard to the way of working to bring the left together in our country or on a regional scale, there can be no ambiguity regarding the essence of our commitment to human emancipation, fundamental human rights, the rights of all peoples and workers.

In France, the “Yellow Vest” movement “revealed the tumult,” to quote Patrick Le Hyaric, director of l'Humanité and former Vice President of the GUE-NGL in the EU Parliament, “making the fractures that split French society a visible, palpable manifestation of the antagonism between those who try to live off their own labour and those who devour the fruits of that labour.2 “.

He goes further: “[This movement3] is an expression of both the systemic crisis of capitalism and the atony of democracy is many countries; the breakthrough of the far right is one of the most significant and troubling consequences.”

The Yellow Vest mobilisation in our country “has created a space of politicisation that may be significantly enlarged if it can grow beyond its initial form of a face-off, a characterisation imposed by the current political authorities [under President Macron], and truly focus on the heart of social exploitation, the forces of capital and money, and big business, which has kept quietly in the shadows since the movement began.”

For the French Communists whom I represent before you today, “the concentration of capital on the one hand and the imperative of social, human and environmental emancipation on the other call for a great leap forward – social, democratic and environmental – to rise beyond the capitalist system4”,  as Karl Marx himself emphasised in Volume III of Capital5:

“From the standpoint of a higher economic form of society, private ownership of the globe by single individuals will appear quite as absurd as private ownership of one man by another. Even a whole society, a nation, or even all simultaneously existing societies taken together, are not the owners of the globe. They are only its possessors, its usufructuaries, and, like boni patres familias, they must hand it down to succeeding generations in an improved condition.”

This is the vision we share at the PCF, for the emergence of a society, a world and a planet freed from the exploitation of man by man; it gives meaning to the struggle that fully engages us, “For humans and the planet first of all” (Pour l'humain et la planète d'abord),  and not for capital and money.

In conclusion, I would like to thank the parties that organised our International Meeting of Communist and Workers' Parties and to extend to all of you fraternal greetings from Fabien Roussel, national secretary of the PCF, and from all of our party members.

Fabien asked me to give you a message following yesterday’s meeting of our working group, to tell you that our national leadership, committed to strengthening the ties between our parties, and with all political and social forces and movements fighting for human and social liberation, democracy, peace, equality, solidarity and justice, has determined to take one or two years to prepare and present our candidacy for organising and hosting the International Meeting in 2023 or 2024.

Be assured that the French Communist Party stands with you in solidarity in our common struggles. 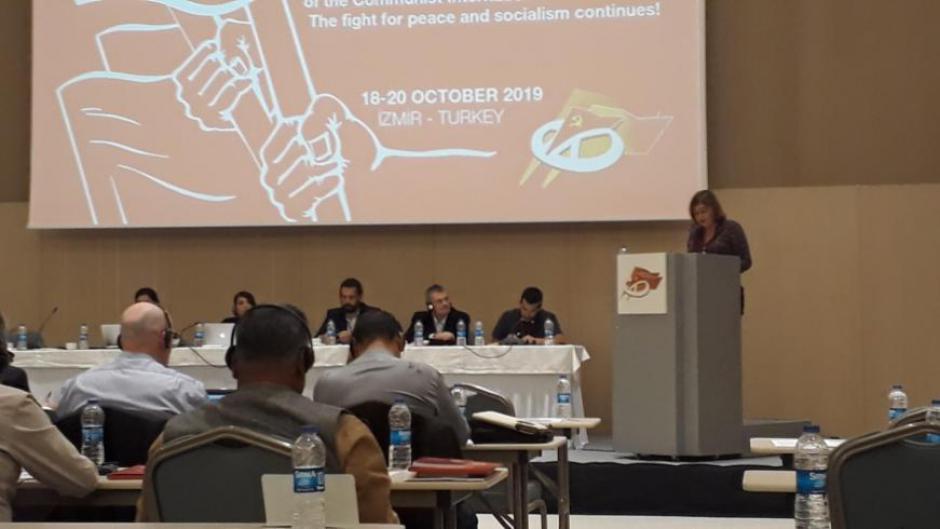