Contribution of the PCF to the 20th International meeting of communist and workers' parties – Athens, 23-26 November 2018

First of all, let me thank the Communist Party of Greece for organising this International Meeting as they celebrate the 100th anniversary of the birth of the Party. We shall not forget how your country’s contemporary history was marked by the decisive contribution you made to the victory over fascism and the national liberation of the Greek people.

I would also like to extend to each of you here the fraternal greetings of our national secretary, Pierre Laurent, and all of the members of our Party.

Please forgive me if I don’t stay longer, but tomorrow morning I have to meet with my delegation in Paris; from today through next Sunday we are holding an extraordinary congress in the Paris region. Because the leaders of the French Communist Party are committed to developing international solidarity, they thought it was important to send a high-level representative to this meeting in Athens. It is an honour for me to represent the Party here, as I did in Hanoi.

The situation is serious, very serious, for people all around the world who suffer from the impact of the systemic crisis of capitalism as it grows ever more dire.

This crisis is leading to the considerable aggravation of inequality in the world and in each of our countries as the exploitation and precarisation of salaried workers increases. It fans the flames of a new economic war and a new offensive of imperialist forces, under the supremacy of the United States, fed by the ongoing neo-colonial plundering of resources, and fuelled by conflict, tension and the multiple risks of armed confrontation.

It is thus imperative that the forces of progress, and Communists above all, help find the paths that will lead us clear away from this oppressive system and towards a future of social and democratic progress, peace, and collective human security; a position where we can fend off these new attacks.

We believe that the immense possibilities for human and social emancipation, for sharing wealth and resources, create an opening for the Communism of our time, the 21st Century, for a process of revolutionary and democratic transformation that we must keep alive in the heart of social struggles as well as political and ideological battles.

Yes, my dear comrades, today we strive for a revolution in the social relations of production through the social appropriation of the means of production and exchange, and advances that will overcome the capitalistic organisation of work and bring about a classless society – this despite the much trumpeted “end of history” that has been announced for the past thirty years.

In the French Party, we view Communism as the path of struggle and transformation that steadily relies on the mobilisation of the greatest number of people, raising consciousness, encouraging aspirations and taking account of the people’s experience to develop and shape the will – already prevalent in our society – to overcome all forms of domination and exploitation.

This also supposes a political revolution which, at every phase, rips the levers of power from capital: whether the State, corporations or the European construction.

Our strategy combines ideological debate, social struggle and political fronts to push back the ruling class. These movements must lay the groundwork for a change of the political majority that seeks this same objective; we will carry out these struggles on every level: local, national, European and global.

In France, ten years of the right wing in power and five years of socialists have sunk our country in austerity and social regression. With the arrival of Emmanuel Macron, political recomposition has accelerated: authoritarianism is on the rise and capitalist interests are more than ever defended by government policies.
We see the evidence of the determination of capitalist forces to bend our will and our country to their global domination in the challenge to our high level of social protection, including medical and pension benefits and public services, which were major victories of the popular and workers’ movements in our country, victories hard-won through class struggle.

Past and present leaders of our country bear a heavy responsibility in what they call “world chaos”: they have served that chaos through their policies benefitting French multinationals that pillage the resources of the countries of the Global South, and by choosing to engage armed forces in new neo-imperialistic and aggressive offensives in the Middle East and Africa. These leaders bear a heavy responsibility in the multiplication of conflicts that have forced entire populations into exile.

Despite the violence of the social war waged against the workers and the exploited population of our country, our people seek to resist social demolition by continual resistance throughout the country. And yet, even with growing unpopularity of the government in power and social unrest, France is still far from finding the possible and necessary political alternative that would bring us justice, social and democratic progress.

In Europe, the current political, democratic, social and economic crisis, which is not limited to EU Member States, offers a fertile field for the emergence of an authoritarian and ultraliberal right propped up by far-right, fascist, ultranationalist and xenophobic forces.

The current refugee and migrant crisis has spurred human rights violations, repression and policies of exclusion that fuel the rise of the far right in each of our countries.

This crisis spotlights the impasse in which today’s EU leaders are caught. By forcing hyper-austerity, social regression and heightened militarism (under the NATO umbrella) upon their people, by contributing to neo-imperialistic and bellicose policies in the Middle East and on the African continent, they are dragging the people of Europe backwards, away from the progress of civilisation.

Faced with this situation, which could be a disaster for the people of Europe and all of the regions of the world that have been destabilised by the neo-imperialist offensive, we continue to assert our demands for higher standards for our country and our people.

First of all, we refuse to submit our country to the diktats of the European Union, which have led to serious social and democratic losses that threaten whole areas of sovereignty in our country. It is urgent that we cast off the yoke of authoritarianism and austerity that is choking the life out of the people and the nations of Europe.

Secondly, we refuse to submit our country to the constraints of a single euro-Atlantic market and to the free-trade agreements that support it, to subject the people of the European continent and the rest of the world to its disastrous consequences.

Thirdly, we refuse the militaristic path that the EU is following more and more deeply in Europe and around the world. We are in favour of pulling out of NATO, and for the dissolution of that organisation in order to create a new pan-European organisation for collective security, a space for partnership and cooperation, in particular with Russia, which would be free of the neo-liberal control of NATO.

All of these actions should encourage breaking away from the current EU treaties, a necessary condition for the realisation of our vision of a Union of free and sovereign people and nations, united in solidarity.

As you know, the French Communist Party has, throughout its history, been at the heart of struggles for human emancipation.

The internationalism that we seek is built on a myriad of experiences, the convergence of Communists and other forces of social transformation, having in common the desire to create an alternative to capitalism, focussed solely on the satisfaction of human and social needs on all of the continents.

Today our efforts involve ensuring a presence in all areas where the forces of progress can unite their energies, struggles and aspirations. In Europe, we work within the European Left, but also with other Forums that seek to consider and meet the challenges facing us today. Our participation in the International Meeting of Communists and Workers’ Parties is a meaningful part of our actions.

For the French Communist Party, the goal of internationalist solidarity is to strengthen the emancipatory capacities of people in their struggle against domination and exploitation, without placing any hierarchical order on these struggles.

Our solidarity must, in particular, call to account the neo-liberal and neo-colonial policies of imperialist powers that bear a heavy responsibility in the exacerbation of current crises and conflicts. This issue especially concerns the people of Africa.

Our solidarity must be felt in the support of resistance and struggles to counter the logic of war and competition among people. For Peace, Disarmament, Denuclearisation, the respect of international law as found in the United Nations Charter.

This solidarity must encompass all people who struggle under difficult conditions to obtain recognition of their sovereignty and their demand for national liberation. Solidarity with the Palestinian people for their rights and recognition of their State; with the Kurds; the Sahrawi; the people of Cyprus; the people of Cuba who have, for fifty years, resisted the blockade inflicted by the United States in disregard of international law.
Our solidarity is acquired and active in struggles to prevent assaults on women’s rights, to fight against the patriarchy, and oppose violence against women.

Our solidarity is acquired and active alongside the people, the Communist and progressive forces of Latin America who are fighting for the exercise of their sovereign rights and democracy.

Our solidarity is acquired and active alongside antifascist forces around the world. I would particularly salute our comrades in Brazil, Italy, Hungary, Poland, and our comrades from the Communist Party of Ukraine, all of whom are struggling in difficult conditions in their respective countries.

To conclude, let me share the words of the great poet Antonio Machado; as Republicans defended Spain against fascism, he wrote, “Traveller, there is no road, you make your own path as you walk”.

In spite of the difficulties that we can neither ignore nor minimise, Communists and the forces of social transformation and emancipation must face up to today’s challenges by uniting and finding the resources to walk together and make the path that leads to the liberation of humanity. This is the commitment of the Communists of France here today, and wherever the struggle calls us.

Thank you for your attention. 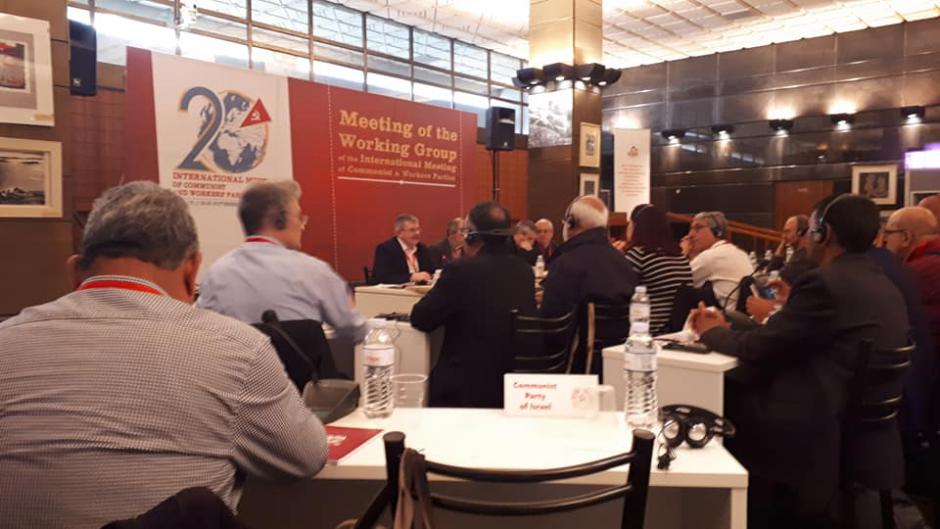